Thank you all for following this blog!
You will have missed an update yesterday.

The reason for this was that internet was not available and next to that it was our longest day of flying almost 10 hours!

We started off that day in Khartoum, Sudan. We had planned an early departure, about 6:30 local time...

We were awake at 5:15 and prepared ourselves including a nicely especially for us prepared breakfast. We appreciated the coffee to wake us up! ;-)
Shortly before 06:00 we were at the airport, but...

The ground handler which took care of us and took also our passports (!) which is normal procedure, was no where to be seen.
We waited for a while... 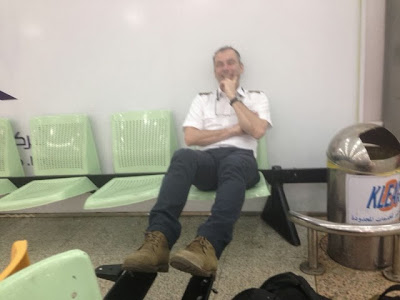 Jeroen started to walk up and down and phone calls were made. Our patience was tested, because of our flying schedule. We both send our prayers up, and finally after a long 45 minutes he showed up.

Ayatollah had a flat tyre, which took them some time to get it replaced...

But once he was there, things happened quickly. We got our passports back and all forms were completed. And groundtransport was arranged to our plane. Last details were discussed, ready for departure! 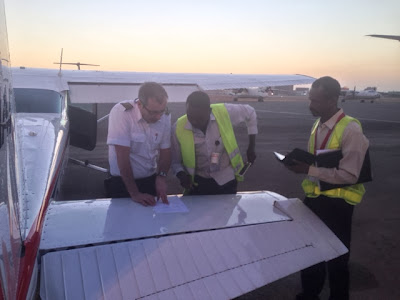 shortly before 8:00 AM we were airborne... We followed again the Nile for a while. Our cleared route took us along Malakal, recently in the news because of the serious fighting going on there. 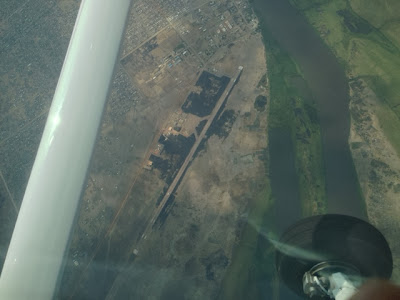 The engine ran smoothly, like it had been doing for more than 25 hours...
But Jeroen and Herman looked at each other, if we have an engine problem here, it wouldn't be a good idea to land here.
But again we put our trust in Him who stilled the waters!

We were glad with the MAF handler there! (MAF uses this airport a lot and even had a subbase there). 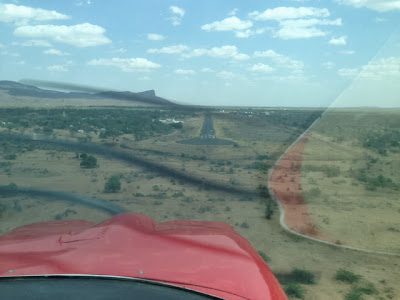 The departure from Loki was a hot one...
Oil temp approached red line... Cowl flaps were already fully open, we increased our speed by lowering the nose, things got better! This is Africa!

We managed to get to Flightlevel 100
( about 3 kilometers height ) a nice altitude especially because we got some nice tailwinds that we needed to get to Entebbe in time to be able to do our last hop to Kajjansi Airport the ultimate destination of D-EMHA.

After 2 hours we suddenly heard a voice on the radio, with a Dutch accent!
It was Kees Barendse, the chief engineer of MAF-Uganda!
He welcomed us and said he would wait for us at Kajjansi and hoped we would make it!

After this we got radar vectors (very nice!) to make an Instrument Landing System (ILS) approach into Entebbe!

On landing Hassan the MAF groundhandler in Entebbe arranged quickly all what was necessary, all so quick that in 40 minutes we were airborne again to hop over to Kajjansi which is only 6 minutes flying from Entebbe and also situated on the shore of Lake Victoria.

Herman made his best landing ever this ferry, MAF-style ;-) and taxied the Cessna in front of the beautiful MAF hangar that both Jeroen and Herman saw for the first time. 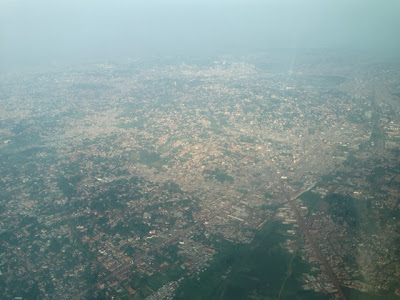 They will miss D-EMHA, a plane that proved to be very reliable this 5 day journey where the engine ran for an average of almost 7-8 hours non stop!!

They are both sure that this C182 will be a huge blessing for the people it will serve! It will even change lives, physically & spiritually!!! 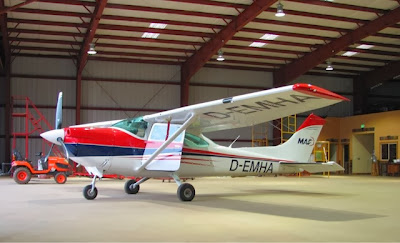 The newly delivered C182 at the MAF-hangar on Kajjansi, Uganda.

Our new aircraft may be small, but they're having a huge impact.

The Cessna 182 SMA is the newest aircraft type in MAF's fleet, and is already serving in Madagascar, DRC, Angola and Chad.

Now, the latest addition 182, which toured the UK in summer 2013, is heading to Uganda, from where it will serve the isolated people of South Sudan.

On average, a flight on the 182 is 80% cheaper than the larger 208 Caravan, also flying for MAF in South Sudan. Because it is so light and small, the C182 has a flight range of up to eight hours - more than any of MAF’s other Cessna aircraft. This make it one of our most efficient fliers.

Herman Sterken and Jeroen Knevel, both former MAF pilots, will be ferrying the aircraft on its long trip south.